…about the roles of small axons, whose size matches that of the majority cortical axons

The current theories of the broader hippocampal network explain its memory functions based on the firing of individual neurons. For example, the sparse activity of dentate gyrus granule cells (DG GC) codes and relays very specific information about the local environment. However, the mechanisms that generate the information-rich GC activity are elusive, because the firings of neurons, which project to and activate GCs, are usually dense and codes different aspects of the ongoing and previous experiences. The translation of diverse inputs into highly different specific codes appears to be one of the most fundamental neuronal computation rules throughout the brain. Therefore, we must understand the principles that govern how single GCs extract information from the activity of single upstream neurons. The fact that our knowledge about the GC output is much more advanced than the excitatory drives to the GCs, are in large part due to the mechanistic insights that were gained by the direct recording techniques from the unusually large axon  terminals of the GCs. Therefore, to understand the excitation of GCs at a similar, we directly record from small axon terminals that excite GCs by further improving the sophisticated axonal recordings.

Using direct patch clamp recordings and voltage-sensitive dye/protein imaging of single small axon terminals we investigate the functional contributions of the axonal excitability properties of the four major glutamatergic inputs to the DG region. These include the two types of perforant paths (PPs) that originate from the lateral and medial entorhinal cortices. The medial PP convey spatial context, such as the famous grid cell activity. Whereas the lateral PP sends specific information content, for example certain objects. Inputs from hilar mossy cells distinguishes subtle differences and the most proximal glutamatergic synapses, from the hypothalamic supramammillary nucleus helps synchronizing (theta) GC activities during attention. Our goal is to better understand how the different excitability and synaptic properties of the individual axons of these four pathways contribute to the generation of specific GC activities.

Direct electrophysiology methods give several advantages. With whole bouton recordings, we can measure fundamental signaling properties, including the exact spike shape, which is important for how much calcium enters and how reliable is the subsequent synaptic release. Or we can also observe the plasticity of spike shapes during physiological activities. We identify the recorded axons with posthoc morphological analysis and immuno-labelling.  By pulling outside out patches from small axons, we can understand the underlying ion-channel mechanisms of their firing. Furthermore, combination of axonal recordings with imaging of GEVI signals (genetically encoded voltage indicators) allows the measurement of the unitary synaptic responses, similarly to classical paired recording. We adapted bouton attach recording for small axons to precisely evoke and see individual spikes in single presynaptic neurons and link these to mono-synaptic responses. Using additional methods we make sure that the recorded signals are correct and not contaminated by the influence of the recording pipettes, including voltage sensitive dye imaging and simulations, where the axonal structure, ionic conductances and also the recording instruments are accurately implemented.

…about the cellular interface between DG and CA3 regions

The mossy fibres (the axon of DG GCs) introduce certain novel information about the environment in the CA3 network, and this incoming excitation is correlated with previously acquired memories that are represented by the interconnected synaptic network of CA3 pyramidal cells. This interaction essential in the ability to distinguish novel situations from previously acquired memories. Our research questions addressed the elementary components of this interaction: the synaptic projections from the DG to CA3 and the essential neuronal mechanisms of GCs that link their exceptional and universal electrophysiological and synaptic properties to their specific physiological functions. An important methodology of the laboratory is the in vitro patch clamp electrophysiology of unitary synaptic connections, during which we directly record from single small presynaptic axons and postsynaptic neurons. Furthermore, we use the patch clamp method to analyze the elementary electrophysiological properties of small axonal and dendritic structures. These recordings are combined with anatomy, immuno-histochemistry, calcium-imaging, computational modelling and virus labelling.

The diversity of GABAergic neurons is manifested at several functional levels. One of these functionally defining properties is the cell-type specific innervations of GABAergic cells by excitatory pathways which enables pathway specific activation of distinct inhibitory circuits. Specifically, we investigated how physiologically relevant activity patterns influence the neuronal output of individual hippocampal mossy fibres (#3 published in 2018, #4 2017) and what are the elemetary rules of the wiring of feedforward inhibition. Other major interests of the group are the mechanisms of the input integration in granule cells (#5 published in 2016, #6 2013). To directly measure the propagation of signals along the dendritic arbors of granule cells we employ dendritic recordings, optical stimulation and calcium 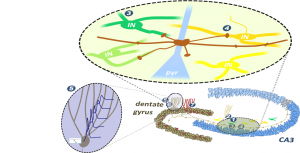 imaging, and verification of the obtained data by multicompartmental modelling. Similar question is asked on the input integration of the CA3 GABAergic cells (#3 published in 2020), which are the major targets of the mossy fibres, where we focus on the cell type specific modulation of the input integration by potassium conductances. We also investigated the potential cellular consequences of the unique capability of the dentate gyrus to generate new neurons throughout the life of the animals by using a specific retroviral labelling method to birth-date adult born granule cells (#7 published in 2014). Altogether, these projects revealed fundamental components of the cellular interface between the DG and CA3 regions, thus, provided novel insights into the machinery of higher order neuronal functions.